Mountains to Move: Exaggeration and Overcompensation 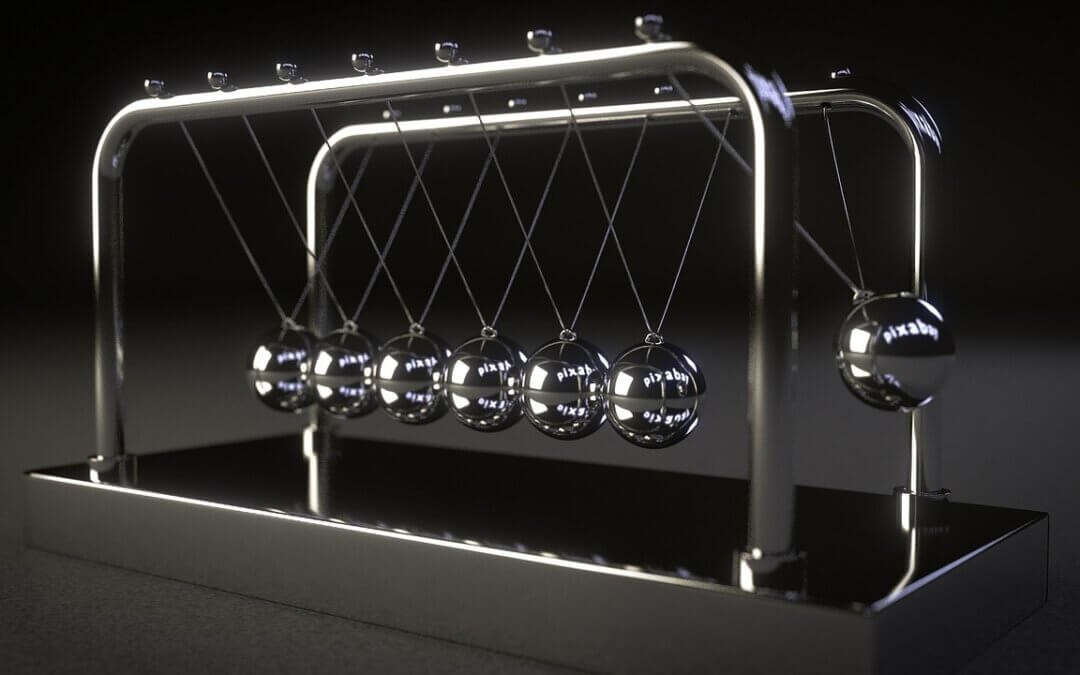 “Women are the BEST!” “Men are HORRIBLE!”, “Men are BETTER because they were created first!”, “We are all the same!”, “Girl Power!”

You’ve heard the slogans. These screeching and contradictory slogans ring out across Western culture. They lead to separation and division among men and women. The goal of the demonic stronghold of exaggeration and overcompensation is just that – polarization. It runs rampant in our nation today, but this is nothing new. Polarization between male and female began way back in Genesis 3, separating what God had joined together. Over the years, demonic strategies have intensified the distance between the poles. 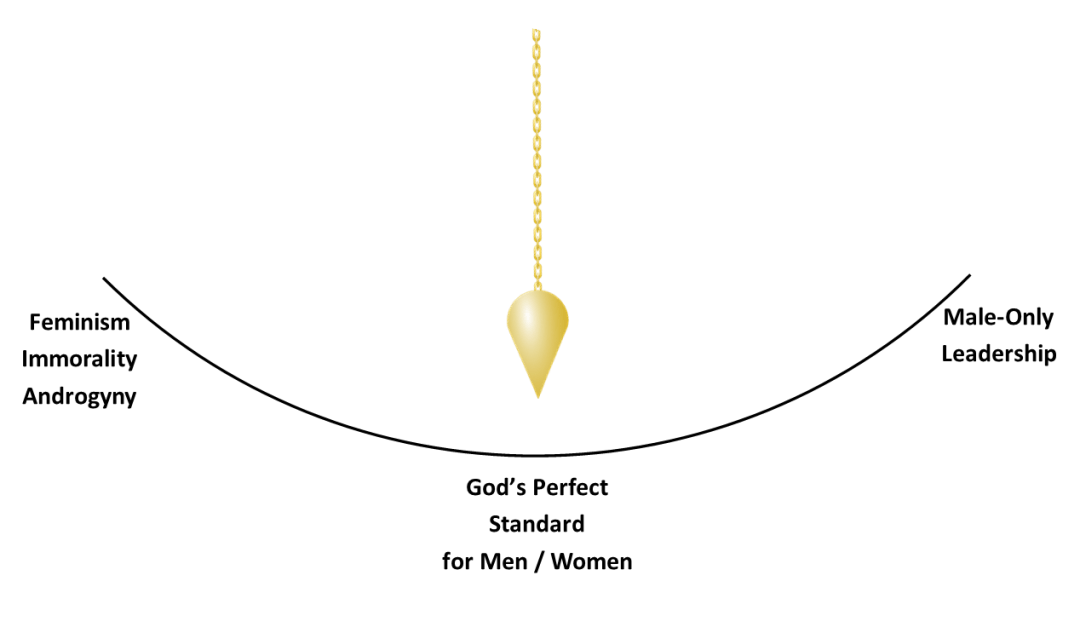 The God-Centered Pendulum
Let’s plant an image in your mind – a pendulum. The center of this swinging pendulum stands as GOD’S PERFECT PLAN for men and women. This is the ideal, the perfection. This is where people thrive and God’s laborers multiply lasting fruit. This is where harmony reigns. Because it’s God’s idea, it works so well! Here we find men and women relating within a system centered on the kingdom of God and the character of the King. This is the aim… godly mutual submission leading to godly unity, and gifted men and women serving as God intended, to let the world know.

Satan, of course HATES this God-centered plan and the powerful godly relationship of men and women. He knows the threat that gifted, unified men and women pose to his deceitful kingdom. He wants to swing that pendulum somewhere, anywhere other than perfectly aligned with God’s plan.

This demonic stronghold of exaggeration and overcompensation pushes the pendulum to the extreme. On one side we have “male-only leadership.” On the other side we have “feminism/immoral relationships/androgyny.” The enemy loves deceiving and pushing people to embrace either extreme.

Extreme #1 – “Male-only leadership.”
From this women-restricting side, you may have heard something like: “Women in ministry is a ‘slippery slope’ to accepting homosexual behavior in the pulpit.” Or “Promoting women in ministry is like a camel getting its nose under the tent. Soon the whole camel is inside.” Noooo… God’s word says that BOTH male and female are given the task of multiplying, filling, and ruling (Gen. 1:28). The Holy Spirit does not give gifts based on gender. And God “looks at the heart” not outward appearance (1 Sam. 16:7). We have included the implications of this position in other blogposts, and its negative impact on the Great Commission.

A pastor once told Leslie, “Women should not lead in the church. They should never serve as elders or deacons. Leslie, you know women wouldn’t want that sort of burden of leadership. That’s for men.” Leslie calmly replied, “Have you asked them? Did they tell you that? Have they ever seen a woman use leadership so that they can see what obedience to the Spirit looks like with that gift?” He responded, “Well, no, but I know they don’t want that burden.”
This extreme of “Male-only leadership” denies the theology of Genesis 1 (or seeks to explain it away) when God gave both the male and the female the task of being fruitful, multiplying, filling, subduing, and having dominion.

Extreme #2 – Feminism/Immoral Relationships/Androgyny
But there’s another extreme. It promotes extreme feminism which often leads to no standards in sexual relationships and even to denying any distinction between male/female. (As a side note, read up on “first-wave feminism.” You are one almost certainly… women’s right to vote, anti-slavery, pro-life. 2nd – 4th waves of feminism have definite roots of evil, including abortion). In short, this polar exaggeration denies Genesis 1, which shows the need for both genders, differentiated as male and female. The enemy loves for people to declare themselves their own moral authority. BOTH male and female should serve together in God’s mission. God’s plan for holiness, marriage, and purity is clear. Humans are differentiated by biological gender as male and female (not by feelings or work-based roles).

A frustration toward male-only leadership can lead to an exaggerated response and a rejection of godly standards. Injustice on one side can lead to foolish overcompensation on the other. Or it can lead to non-logic, confusion, bitterness, and pride. As men and women, we must consistently walk in the humility of the Holy Spirit.

The enemy hates godly unity and godly submission! Accusations may fly that the dream of Shoulder to Shoulder is all about “women’s rights” or “the destruction of men” or “androgyny.” These are all lies. No, our dream is that God’s kingdom, character and standards will be reflected in God’s sons and daughters, so multiplication of laborers can happen, so the Great Commission can be completed! Pray the pendulum of theology will swing rightly, straight down the middle of God’s truth, God’s character… and stop there!

Please know that we are not talking about finding a balance, or a happy medium that does not offend anyone! We are talking about being focused and rightly aligned to God’s character. In reality, God’s standards will bring conviction and will offend many. May the Holy Spirit convict us when our natural inclinations, our traditions, our culture, or our own wills influence us more than Jesus and his Word. This realization will cause either repentance as we accept God’s standards (we hope) or revulsion as we reject God’s standards. Sadly, the second is more than likely to happen. May we be different!

God’s standards in God’s kingdom are based on God’s character.

Jesus had a simple and powerful battleplan against the stronghold of exaggeration and overcompensation. When religious leaders asked Jesus about marriage, where did Jesus point? The current 1st century standards? Patriarchy? Jewish tradition? Radical feminism? No. He pointed to God’s intent “in the beginning” (Matt. 19:4, 8). Jesus battled this stronghold not by making an exaggerated polar claim. Rather he called out people to follow God’s original plan – man and women side-by-side and shoulder-to-shoulder, commissioned for the world. Selah…

Like Jesus, we are not addressing the social agenda of any modern political party. We ARE advocating for the holy standards of an eternal and holy kingdom, ruled by the Most High God. His initial intent and his final goal, should remain our guides. What did God design for men/women “in the beginning”? How will heavenly rewards be distributed in the end? And what model of men and women in this present age might set the God-honoring example that “will let the world know?” (John 17:23)

Jesus defeated the demonic stronghold of polarity by fixing his own gaze and the gaze of his listeners to an outside kingdom, a standard that blunted all polarizing groups. Pray S2S workers will live with mind-boggling mutual submission leading to powerful unity for witness.

The enemy wants shrieking overcompensation and fractured relationships. He wants objectified women or rude women. He wants offended men or weak men. He wants Christians who don’t know what to say in the blatant face of confused androgyny. More victories for Satan equals:

Pray that those involved in multiplying men and women for the Great Commission will rightly divide the Word of Truth and line up with God’s character! May the mountains of Exaggeration and Overcompensation be moved, in Jesus’ name!