Did God Turn His Face Away? And Why It Matters. 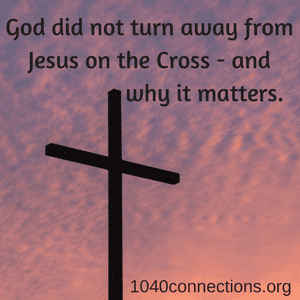 You’ve heard it too, haven’t you? “God is so holy that he turned away from Jesus on the cross.” It’s a common phrase used by many well-meaning people, but it is not true to the biblical text, the character or God, or the mission of Jesus. Beliefs impact actions and therefore during this Easter season, we want to share why we think this phrase is biblically inconsistent.

So where does this idea come from, that “God cannot look upon sin?” Perhaps from Habakkuk 1:13, “Your eyes are too pure to look on evil; you cannot tolerate wrongdoing.”

When reading the biblical text, it is always important to look at who is speaking. Here, the prophet Habakkuk speaks and in his speech he expresses his confusion about why evil is prevailing. These are words Habakkuk uses to describe God, not God’s own explanation of where he can and cannot look.

There are many problems to a belief system that declares God turns his face from Jesus on the cross because God cannot look at sin.

1. God loves and God looks. When the first man and woman sinned… who hid and Who searched? The man and woman hid in shame; God came looking for them despite their sin! Jesus later declared that “The Son of Man (Jesus) came to seek and save the lost” (Luke 19:10). He did not avoid sinners. Rather Jesus healed them, taught them, ate with them, cast demons from them, discipled them, and more. The Holy One touched the unclean – and the unholy became clean. If God could not look upon sin, then the incarnation (and many other significant events) could not take place. Yes, God got dirty when he became a human and lived among us for 33 years. But on the cross, Jesus (who is God) took upon himself the world’s sin. Because he loves us, not only could Jesus look at sin, he wore it and absorbed it for us so that he can pay for the failings of all humanity.

2. If God cannot look at sin, then what does that say about Jesus? Jesus is fully God, and fully human. If we say that God cannot look at sin, then we dishonor the divinity of Jesus Christ. We should not think that God the Father is more holy than Jesus the Son. This belief would effectively mean that, “Jesus can look upon sin, but the Father cannot!” Indeed, not the case! Jesus took sin upon himself and then in His holiness and power overcame it.

3. Sin cannot split the Trinity. If God turned away from Jesus on the Cross, then sin appears to be more powerful than the unity of the Triune God. Did sin break the Trinity? No! The Triune God is too strong to be split by anything, including all of the world’s combined evil! What separates Christianity from all other belief systems is the truth that God came to earth, lived perfectly though tempted, and took upon himself the shame and punishment of humanity’s sin. This is why from the cross we see Jesus speaking to the other Persons of the Trinity, “Father, forgive them for they know not what they do” and “Father, into your hands I commit my Spirit.” (Talk about the strong unity of the Trinity to the very end! Awesome!) Jesus knew the Father was with him – watching him, strengthening him, suffering with him, and seeing holiness fulfilled through him. Rather than sin breaking apart the most holy and unified relationship in the universe, sin was shattered and the Enemy spectacularly defeated.

4. The entire Trinity shared in the sufferings of the cross. All three Persons of the Trinity experienced the Cross because they are united in action. Whether we consider creation, redemption, Pentecost, or the end of time (consummation), all three Divine Persons participate in the work of the other Persons. For example, the Spirit never operates independently from the Father and the Son, etc. Therefore, when Jesus died on the Cross, the Spirit and the Father participated in the suffering with him. Therefore, Jesus was never alone.

5. Jesus called his audience to remember a psalm. Yes, Jesus cried out from the cross, “My God, My God, why have you forsaken me?” However, this is not a cry of defeat. Rather in an oral culture, it could prompt people to think of Psalm 22, and remind them of the victorious conclusion. The psalm which begins with despair and vividly describes Jesus’ sufferings, ends with a rallying cry of victory. To hear more about the messianic prophecy of Psalm 22 and Jesus’ reminder of the song in his oral culture, listen to 10/40’s podcast Live it Out! from Friday, April 14. You can find it here.

So why does it matter?
⦁ God has set us apart to engage the world – not to retreat from it. God did not retreat from the heartbreak and agony of Jesus on the cross, and neither should we.
⦁ As God’s holy people, we are set apart for his purposes. We should seek to reflect the holiness of God while loving and reaching out to unholy people.
⦁ Jesus got dirty as he left heavenly comfort to come and engage this messy world. In the same way, God wants us to engage others even when it is uncomfortable. We can choose to live simply so that others might simply live.
⦁ As a new creation in Christ, God is working within us to renew and restore the image of God. With our thoughts, actions, and words; each of us should seek to reflect the character and action of Jesus.
⦁ If God forsook Jesus on the cross, then we could imagine that God might forsake us when we mess up. NO! Indeed, Jesus promises to never leave us or forsake us.

10/40 Connections wants to see a generation of Christ-followers rise up who live out their faith and engage in love and war with commitment and courage – in partnership with Jesus Christ! May 16, our book is releasing called Engaged in Love and War.  If you order before midnight on May 16, you receive THREE giveaways! Get this book.

As you ponder Holy Week, may you realize that God loves you so much that he didn’t turn away from Jesus on the cross. Rather Jesus “wore your sin” so that you could “wear His righteousness.” This is the divine exchange – our failings and filth for his faithfulness and forgiveness. That’s how much God loves you. Now go and make this amazing Jesus known.